7 replies to this topic

Boruto tomorrow. So, like I said before there were five side chapters able to be fit in-between the gap in the monthly chapters, three for this manga.

Summary Time: Chapter 3. Are we going to see Sakura or focus on the Male Karin and his Dino this chapter?

No cover page. Chapter starts off with Sasuke's realizing Zanzul has glass eyes...which he learned last chapter. Another problem of this manga pacing. While it might sound good to continue almost directly from where the last chapter left off. This manga isn't doing that but instead going back a bit then continuing. It might be fine for this online bi-weekly phase to remind people where they left off, but it probably jarring in a volume. Its better to have a logical break point in-between chapters. He again warns Sasuke he will be watched.

Sasuke gets beaten up by a guard because he doesn't like the look he was given him. His cellmates are worried about him. They guess he got on the director's bad side then joke it is because, he is prettier than Zanzul. That cellmate from last chapter notice Sasuke is gone and ask a guard for the pass to the nurse's office in order to search for him. Sasuke stole that guards pass. Sasuke to show he is a good guy find someone a prisoner locked in a locker. He couldn't leave with out a pass or the dino will hunt him. Sasuke gives him the pass he stole. Sasuke fights the Dino again. Sasuke realize he being disoriented because the raptor's claws are coated with some toxin. And, here is Sakura. She plays guess who with him. She looks like what you would expect when some is actually trying to emulating/copying Kishimoto's art-style.  Sasuke faints and wakes up in the nurse's office. Sasuke ask about Salad, and Sakura says she is staying with Iruka...didn't know they were that close. Sakura is here to inform him of a change in the mission...there was a mission? I thought it as Sasuke running off to do this on his own again? Shikamaru sent her a hawk -she was already heading over here (why?)- Kakashi found a book in the capital that goes into detail about the illness The Six Path Sage once had...wouldn't be better if Tsunade had found it instead?

...Ok. The Sage once meet a Astronomer of Tatar. One day a meteor almost hit the Ninja World. The sage cut it in two, when it was cut a bright light cured the Sage of his illness, and he was cured due to the ULTRA PARTICLES in the meteor.  And then a bunch of riddles to answer where the Sage put the particles.

Naruto's illness is due to malfunctions in his chakra channels due to be a container. Thought him being that since he was born and also his mother was the pervious container would mitigate it. Also, this has never happened to any other container before? What did they not care or did they not last this long? Pretty sure Killer Bee is older, Roshi of the four-tail, and there was the old monk that once contained the one-tail.

Sasuke asked why Sakura came on her own instead of sending a hawk. She said she did, but it never reached him. and she assumes it was because of the Raptor. So they have a new hawk with a pass, which is a cloth. Sasuke tells her to go back to the village. She refuses. Jiji the prisoner comes in and flirts with her. When she turns around he tries to grab her hair (he is a prisoner that hasn't seen a woman in a while but her guess what might have happened) Sasuke intervenes. The reveal to Jiji they are married...Why? After leaving Jiji and Sasuke talk about women, Sasuke being married, and Jiji has a fiancé in the capital. They talk about the ring again. He ask about a map that suppose to show where the sage hid the particles. Jiji says one of there cellmates is a library attendant, who is a gambler, so he might know. Sasuke informs Sakura.

4/10. Art's fine. Sakura being here still feels like it has not been explained, just given excuses. Naruto's disease sounds like an excuse for the plot. Ultra Particles sounds stupid. No clue, why they had to explain that they are married to prisoner, are they relying on the guy code? The starting on the scene the last chapter had needs to be worked on.

It is suppose to show that Sasuke does care for and is protective of Sakura, who is his wife. Its the same reason they decided that they needed to tell his cellmate that they were married when; it really isn't needed.

However, the writer clearly put their desire -a SS moment- before the reality of the situation. Why she would turn her back to a convict? Yes, she did that with the Zetsu pretending to be Neji, but that was clearly bait. Either, to put it nicely, he was just going to touch her hair, or more likely sexual assault. From what I understand, when a convict in a prison is sent to the medical ward, they are escort by a guard the entire time. Hell, normally there is a guard always station near the medical ward just in case; so a situation like that doesn't happen...Actually looking it up, yes, it is normally a team of guards escorting people. I understand, that this prison is lax because of the Dino guard but this seems more ignorance of the writer than that. Though it would explain why there isn't another doctor or nurse. They likely got stab by someone who nickname was likely Shanks or Shiv.

Granted, I have gotten the impression she would have been fine as other than Zanzul; none of these people seem to really know that much about Chakra other than a few tricks at best. So, she could probably beat him up with ease.

How much a Flop Boruto  really is? A Spin Off surpassed the original Story 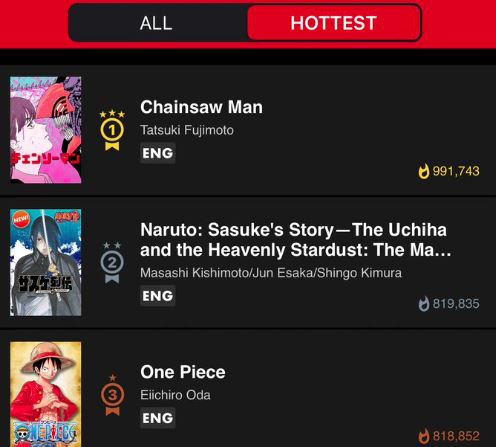 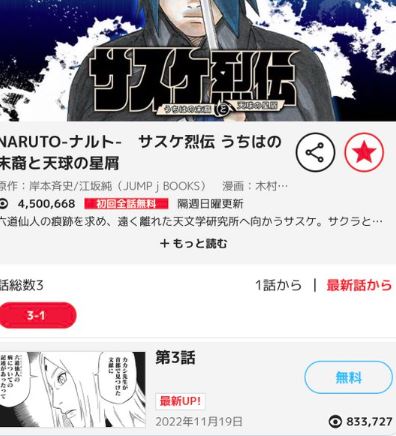 Is Sasuke, Sakura or SasuSaku really this popular  or simply Naruto's son (and Kawaki) is too uncharismatic to carry a story alone? This could give some feedback to Kishimoto/Ikemoto that almost nobody from old and original Naruto's fans care about Boruto and his alliens.

How much a Flop Boruto  really is? A Spin Off surpassed the original Story

Is Sasuke, Sakura or SasuSaku really this popular  or simply Naruto's son (and Kawaki) is too uncharismatic to carry a story alone? This could give some feedback to Kishimoto/Ikemoto that almost nobody from old fans Naruto's fans care about Boruto and his alliens.

First. Thank you for showing that, last time this side manga beat out Boruto people on reddit and other places tried to play it off that the site lowered view after awhile so that's why it won. Clearly that is not the case.

Second. As for this story, they went with the Naruto name because clearly the Boruto name was considered toxic for sales, I think its a 4/10 because while the art is good (it has problems in places but it can copy Kishimoto style well enough) the story is bad. The background for why this story is happening is contrive as are a lot of the story beats, they randomly put a dinosaur in the ninja world for no reason damaging the feel of the world, the writer put their desire over obvious logic, and the story could be fixed with very easy rewrites which makes it feel like a first draft in a way. I however, also think Boruto is only a 1 or 2/10, so it is doing better than Boruto I just don't like the story, and Boruto's manga is pretty much a flop.

Third. After the ending the franchise was suppose to rely on nH as it new flagship to get fans to purchase products, but the Last (and other projects) quickly showed that nH fans don't financially support Naruto-Boruto; they just pirate it. So, they had to switch to appeasing the secondary pairing SS whose fans do purchase Naruto-Boruto products.

Fourth. No one really likes Bolt they defend him because he is Hinata's son, some maybe like Nail, but that overall story is garbage.

First. Thank you for showing that, last time this side manga beat out Boruto people on reddit and other places tried to play it off that the site lowered view after awhile so that's why it won. Clearly that is not the case.

Yeah. 75 is out and Boruto manga is still pretty much bellow Sasuke and Sakura's side story.

Honestly Boruto could be better if Kishimoto even focus on Old Generation more. Even Sarada, the only likeable child from the new generation, is  side lined now.
Boruto deserves every low ranking and flop.

Yeah. 75 is out and Boruto manga is still pretty much bellow Sasuke and Sakura's side story.

Honestly Boruto could be better if Kishimoto even focus on Old Generation more. Even Sarada, the only likeable child from the new generation, is  side lined now.
Boruto deserves every low ranking and flop.

Kishimoto isn't in the driver seat I'm pretty sure that this is Ikemoto with Kishi giving him some advice here and there.

Salad used to be the closest thing to a core character in Boruto before Ikemoto got his hands on it and decided to repeat the SNS conflict. As she wanted to become hokage, Bolt wanted to be her supporting shadow, and Cups wanted to become a real boy by spending time with them.

this kitten hurts my little heart. A whole damn story dedicated to SS? Would rather swim in Great White infested waters rather than see this.

Back to Latest Releases