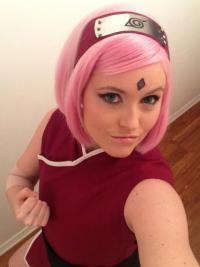 I'm not really good for presenting myself.

I'm from Canada (Montreal). I work as an accounting manager and I actually study to have my bachelor degree in that field

) such as Naruto, D Gray-Man, Runouni Kenshin, Slayers and Salor Moon.
I also like reading medical thriller (my favorite author is Robin Cook).
Music : I play piano, flute and, in the future, wish to learn violin. I also love listening different kind of music (classical, RnB, techno, dance,rock etc) except for heavy metal and old country)
Sport : Walking, swimming and tennis
Drawing : Mostly manga characters but I do some realistic portrait ( even if it is a long time since my last one).
Cosplay : I recently join the wonderful world of cosplay and I most say that I'm quite addict to that. My first and most favorite ( I don't have much for now) is Sakura but I do other like Aqua from Kingdoms heart and Sailor Mars from Sailor moon ( of course lol). Cosplaying gave me the opportunity to find another passion, sewing my own costume. For now I don't have much but I plan to do more in the future :

I have a DeviantART account to show my works : Silverserenity01

I only start watching Naruto recently (on spring 2008). At first, I didn't give much interest but, the more I watched, the more I became addicted to the anime. Of course, since I'm canadian, the anime is so far behind ( the first generation is not even finish) and I was kinda tired of watching always the same part (mostly the Chunin exam) so, I start searching on the net for some streaming episode. When I start watching shippuden, I just couldn't stop anymore, I was officially addicted. I later found scan of the manga.

In the first generation, I was a NaruHina fan and I didn't give any thought for NaruSaku and, as for SasuSaku, I only see it as an oneside love. Later, I start reading fanfiction about NaruHina and, at first, I found it cute but, at some point, I realize that it was unrealistic. I found my revelation for NaruSaku when I read the manifesto made by Heronite and I, since them, can say that I'm a proud NaruSaku fan all the way.