I just stumbled upon this series a few days ago. From what I understand the series started as a webcomic then was picked up and turned into a real manga. But in a sense Onepunch Man is a fighting/superhero/monsters manga. It basically satirizes a lot of the fighting or super powered manga/animes out there. Especially DBZ.

Wiki describes it as:

The story takes place in a the fictional metropolis of City Z, Japan. The world is full of strange monsters that mysteriously appear and cause many disasters. Saitama, the protagonist, is a super powerful hero who easily defeats the monsters or other villains with one punch. However, after becoming too strong, Saitama becomes bored of his powers and is always trying to find stronger opponents who can fight him.

On his adventures, he meets new friends, enemies, and his own disciple, the cyborg Genos, and joins the Hero Association in order to gain fame for all of his actions to prevent evil. Despite defeating many strong monsters that even the Hero Association’s top heroes are unable defeat, Saitama struggles to gain respect. 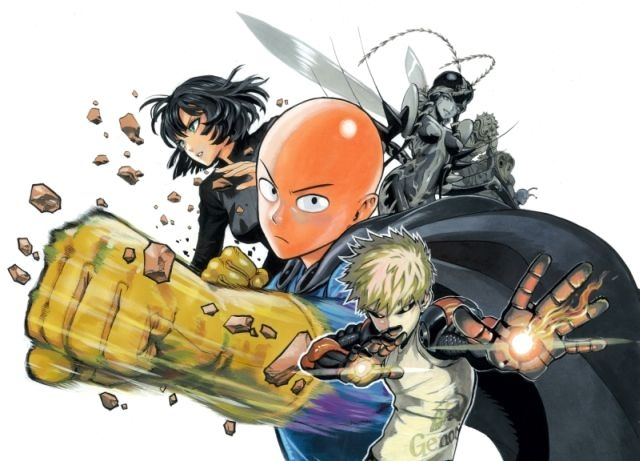 It's hilarious! I love it! Saitama, go!

This is one of my favorite mangas ever. It's just my kind of humor too yes, freakin loved it. It's funny because you can tell that both artist love the genre. I'm interested in seeing what happens after the last chapter.

New chapter is finally up

No, Saitama! Why you do that? He could've deflected the fame and still kept some of the credit... but he just messed himself over. Weird... honestly to this point he hasn't shown emotional concern for others. Just seeming to smite evil because it's what a hero would do.

What I found interesting is the fact that, Saitama finally got acknowledgement for amazing deeds but opted to preserve the public image of super heroes in general. The only thing I really hope comes from this is while his public image may decrease seriously, but his reputation within the Superhero Organization dramatically increases. I mean to the point where, although the public may consider him a cheater or whatever, but within the super hero Organization the members treat him like the true hero he is.

Granted this is my wishful thinking, but it would be nice to see Saitama finally get some sort of acknowlegement, even if its only within his group.

I really want him to get his just due, but maybe he never gets it and the series ends with him staying in the shadows. Or ends with him getting recognized with everyone and then they suddenly all get memory wiped so he's back to square one. He's pretty boss, though. Love this series!

I figured before the end, it will become known. Be it through just the SuperHeroes organization or the public entirely. I'm currently rereading through the series again, I'm interested in seeing all of these other superpowered superheroes. Not to mention the origin of how Saitama got his powers. Something else that I was wondering, where did all of these monsters come from originally. Someone must be sending them or creating them. So that will be interesting if they delve into what's behind all of that.

I actually hope they never reveal where he got his powers from. I mean... didn't he just say he super-worked out? I thought that was it, and I'm completely okay with that. And the monsters too. The world this manga takes place in is already so ridiculous that I think that since it's a send up of the genre, it works perfectly fine for them to just suddenly appear.

I actually hope they never reveal where he got his powers from. I mean... didn't he just say he super-worked out? I thought that was it, and I'm completely okay with that. And the monsters too. The world this manga takes place in is already so ridiculous that I think that since it's a send up of the genre, it works perfectly fine for them to just suddenly appear.

I totally agree with you. The reason why I enjoy this manga so much is because of how ridiculous. I am content not even knowing where Saitama gets his powers. It's not really a series where I'm looking for too much "depth" haha. Of course some depth is good, but too much I think it will lose some of its charms, to me at least.

Despite the fact he says that it's clear he's beyond human. Even those flashback chapters, they show him having random spasms of pain that wrecked through his body. After the last session, bham! He's one-punching everything. I think the monster's thing could be a cool arc because it's obvious the artist is kind of reaching for ideas at this point. Honestly, i don't expect this to be a long series and to be honest I think it would ruin the feeling of the series overall if it was dragged out like some other manga series.

Hm... Yeah, I don't think it's a 400+ series. But I've cheated and skipped ahead reading the original web-manga and it's getting to  around 100 chapters and I still like it a lot. I think the refreshing thing about this series, is because it is a spoof and is so over the top, that the monster of the week formula can work very well as filler until a new story arc develops. It's just fun. And that look Saitama gets when he's confused... priceless.

I too have read the original webcomic. It's basic in everythign but storyline. But it's still very entertaining. I'll be interested in seeing when the Manga gets caught up.

I like that moment at the end. Licenseless Rider!

Yeah I have to agree that was pretty cool. Its interesting to see how the Hero Association sees him now, but I wonder when the Manga gets caught up and how they see him after the next story arc. It's interesting, the manga has fillers from the webcomic. lol

Reactivate dead thread since the manga get anime!

So it's that true the anime get animated by mad house?

So it's that true the anime get animated by mad house?

Yes. Glad that it's MadHouse.