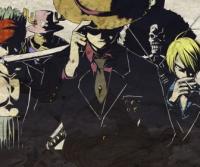 First of all,I am a Christian.I am full of contradictions and contrasts.I enjoy physical activity but also enjoy reading and "quieter" activities.Although I'm a Contra there are still a lot of things about me that are similar or close together.I enjoy training to improve myself whether academically,physically,mentally or emotionally.I see myself as determined(although this does lead to stubborness),persisting and calm.However once I have lost my calmness and am fired up,I will do whatever it takes to finish the task.
My interests are:

ANIME/MANGA (not in any specific order, besides sequels are grouped)
1.Naruto
2.One Piece
3.Avatar
4.Avatar:The Legend of Korra
5.Fullmetal Alchemist

One Piece:I recommend to everyone coz it's awesome.
Favourite Characters
1.Roronoa Zoro
2.Monkey D.Luffy
3.Usopp/Sogeking
4.Smoker

TRAINING
I enjoy training for anything.It gives me a goal to work towards.

Before anyone rants, this is NOT about NaruSaku despair... It's about H&E despair. This site has meant a lot to me and to others, but it is rapidly falling down on it's broken foundation.

Sooo many people have simply stopped visiting this site, whether gradually like most or suddenly, it took about 2 months after the ass-pull ending and failed continuation, but it's happening quickly. Many people still consider themselves NaruSaku/Naruto fans, but whether or not this is true, almost none of them are active or care as much as they once did, they're simply giving up on Naruto.

Many of you will object greatly, but first think about it, did you not go on this site for a while out of forgetfulness? Did you stop caring? Even if you don't fall into this category think about it? Do you care as much? If you do, remember many people don't care as much anymore. This isn't a recommendation or criticism, it's simply me pointing out the obvious (forgive me).

I'm not speaking from some high and mighty position, I haven't posted in almost 3 weeks.

Even the remainder of people on the site don't care as much and are talking about other things.

I am NOT saying shut down the site or something as stupid as that, but remember this.

You are only allowed to post in this thread if you have more than 3 friends and all of them are as active as previously.

(You have to click on this picture to understand, because if you think Naruto is still this, then you're seriously misguided)

It's just an idea I had and I want to see if it will work.You have to say what happened in your day today or recently and it has to be a rap/rhyme/poem.It would also help if you rated the person above you for their rap.It doesn't necessarily have to be true,just think of something.

"Today was absolutely great.
Today I went on a date.
Today was really,really fun.
To be honest I'm glad she didn't run!"

Just a thread to talk about the new Smash bros coming out, post links to reviews,videos,trailers etc...Talk about old Smash bros too if you want to, and try to review your favourite character,new or old.

My favourite old character would have to be either Fox or Falco,can't really review them.

My favourite new character would have to be Little Mac.He does some of the fastest,most powerful attacks in the game (he also has a.really good long ranged attack as well,unfortunately his saving moves are really bad, and he can only save from directly below a ledge,not from its side.It would be best to use him in an arena like the boxing ring,where it's more about fighting than fighting and saving.Bad choice for an aerial battle.If your aim is to get the highest percentage (on your opponent) quickly, he's the man to go to.

Also post ideas for new smash bros games,personally I wish that you would chose the arena before you choose the character.

Would you learn Black Leg Style?

I looked into the Black Leg Style from One Piece from Sanji and Zeff,and I found out that you could achieve something similar if you mix kicking techniques from Taekwondo,Savate(french kickboxing) and a little bit of Capoeira.Would you learn it?As a separate question,will you?Check out this awesome,slightly related,video.
https://m.youtube.co...h?v=Gnu94B6Edrs
Skip to 1 minute if you want,the first min isn't really important.

What do you think about fanfics?Check out this one.

Check out this fanfic.
https://www.fanficti...1/RedLeg-Naruto
Check out this fanfic,it's pretty long but I reckon it's pretty good and has a good topic.Spelling and writing style isn't that good to begin with but improves.Read at least to Chapter 11 before deciding whether it's good or bad.Post feedback.Post any good fanfics for discussion.