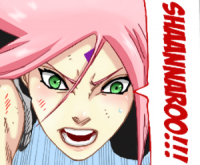 Oh by the way found out why Kishimoto was put back on Boruto. Kodaichi the previous writer was rude to his co-workers so they fired him. Don't know the details beyond that.

I don't mind if it was the exact same story. But he has to do it HIS way.

Kishi to Naruto: you thought I was done?

Kishi to SP and Shueisha:

You could not live with your own failure. Where did that bring you? Back to me.

...Are they that uninformed & illiterate that they can't even read the credit on the title page?

Hmm, true, I'm not putting hope in it either, I mean Kishi would need to come out and say the ending was a mistake I mean we can all dream and hope, but if this is true how can they do it that will make it feel right?

Again this news isn't me hoping for a new ending aka the true ending. Because like I said even if they do that, it won't change what is done.

However like I said, something changed that made him return. And that something is what I'm focusing on, not interested that much, but curious to know what that is for him. For SP and Shuiesha it's obvious.

I'd say desperation, not on Kishimoto end, but rather from the publisher and/or anime studio. People need to know that Kishimoto has always been involved in Boruto (supervising, whatever that entails). So, this is nothing new, and probably just a marketing stunt.

Why I think it shows desperation? The franchise generated a gross revenue of 8.1 billion for manga magazine and manga volume alone in the span of 15 years (https://en.m.wikiped...edia_franchises) starting from 2000. It's sold 250 million copies in that timeframe.

Of course they're desperate to fix it. More than 80% of Naruto franchise's gross revenue comes from manga magazine and manga volumes.

The whole point of Boruto is to gain more profits. All these U-turn in the storyline, killing NS to make NH/SS canon, put Hinata as the heroine and push Sakura as non-important character. All of these have only one objective: money.

And not only they didn't get the money they thought they would've got, those steps actually killed the very engine that finances this franchise its loyal readers. Those that supported the manga since its early days.

The signs are very clear. They didn't put Hinata in the front seat anymore, immediately after The Last. You hardly get any meaningful NH/SS moments in the manga or anime after The Last. They advertised Hinata as the true heroine when The Last came out, and at the start of Boruto manga. Have anyone heard anything about it again?

When it aired in Netflix, or other streaming media, you'd see Naruto, Sasuke and Sakura on the poster, or Team 7. You wouldn't see Hinata, even after The Last. I keep telling this, and I'll repeat again: Hinata doesn't sell. She didnt bring money to the table. They tried selling merchandise with her in it, it just didnt fly.

As for the official take over, whatever they call it (honestly, it's more like someone was getting fired, lol), majority of the fans probably don't care anymore. It's a lost on Kishimoto end, if he wished the old fans to return and buy his manga. We have moved on.

I think it's important to note that money may not be Kishimoto's motivation in coming back. He's worth more than $20 million (a rarity for mangaka to attain such value, although I think it's an unfair distribution considering the overall gross revenue).

Regardless, he has placed himself in a difficult position. If the Boruto manga sales stays flat or decline even more, he'll proof even further that his name as a brand doesn't carry weight. If the Boruto manga sales gain steam, he'd be expected to bring it at Naruto level of success or even more. This can only be done by major overhaul to Boruto storyline. Anything below Naruto sales will further proof the whole storyline u-turn brings nothing but destruction to the franchise.

He's competing against himself a decade ago. The difference this time is he no longer have that loyal readers supporting him, he no longer have editor like Yahagi who steers the storyline direction (let's face it, Kishi is not a storyteller genius like Yoko Taro) and he's not that young anymore.

I wouldn't hold my breath on the news. Deep down we know where this is going...

100% it's desperation from the Shuiesha and SP. I mean it's way too obvious, they have a product which performed really well before the creator left and now they are doing terribly. So bringing back the creator is because they are desperate.

Oh and it's not going to miraculously save this mess, nothing can do that. Maybe a little spike of curiosity from old fans, but Samurai 8 proved that his name alone doesn't mean much anymore plus he's not good.

Of course I say that then this happens the next day.

Well that, sadly that's what these websites are made for... clickbaits, not actually thoroughly thought out articles.

Not just those websites, but others as well. And that goes for news as well.

It's not about delivering you well thought out articles, subjects, reports and accurate. It's about getting you to continue to watch them, to visit their website, to get you hooked and for you to stay that way, not thinking about what's actually served to you. Just consuming it.

I definitely agree. The highlight is definitely Naruto refusing to spend anytime with Hinata however, though. Makes me respect Kishimoto just a little that he's subtly showing us that Naruto isn't happy with Hinata because Sakura-Chan is the woman he has his heart set on.

Like I said before, I'm not Kishi's defender nor do I want to defend him. But looking at what's presented to me, I don't see a guy who wanted to do this. Is he responsible for what happened? Yes, but he is not the only one.

To me in life I've discovered ever since I was a kid, that one of the most important questions is "Why". And I have to ask why if NH and SS were the ones he wanted originally or decided down the road, did he do the things he did?

For example until the end while he was playing around with the fanbases, it still remained clear that it's NS and SK.

And after the ending and during it, why did he show a miserable relationship for both NH and SS?

Why does he have Naruto stay away from his wife? Why does Naruto spend more time with said Sakura's kid rather than his own?

Why have the drama of pointing out that Sarada is not Sakura's kid? And then at the very end inventing some lame excuse.

Why isn't there an actual real photo of Sakura and Sasuke as family? Instead Sakura superglued her own face on Karin. XD

Why do we see that Sasuke is never around and when he is, is forced to be and he's distant and not caring at all.

does anybody find it weird that Kishimoto wrote Gaiden, and the entirety of it was basically Sarada proving to Sakura-Chan why her and Sasuke don't work? All she did was call Sakura-Chan out on her "relationship" with Sasuke.

And I say that because if he wanted he could've made Gaiden be complete fanservice to the SS fanbase. Yet he didn't. Why?

I mean look at SP's movie. Complete fanservice to NH. Well to be correct fanservice towards Hinata rather than NH.

I see Kishi's action as a sign of protest. He had to do what he had to do, but he made sure that people understood that he didn't like it.

Nope not at all because this page was beautiful, as it shows the close relationship that the two have for each other.

True that right now neither are a couple but give it time and they will get together.

It's because when I saw that page, I saw them. I saw the characters that I fell in love with. (Not in that way XD )

It's the essence of what made me continue Naruto when I got into it. I've said this before I've started watching Naruto because I saw the Naruto vs Gaara fight and saw monsters and said yeah I'll give it a shot, but that's not what kept me going. It was the characters, the story.

And seeing this made me feel like here's a fan who actually gets it, unlike the people who were in charge of it.

It's called the Manji, and its what was used a lot in Buddhism before Hitler inverted it for the Nazis' symbol, seeing the Manji as a sign of power when he made it into the swastika.

It was a Buddhist symbol, svastika, that Hilter liked. So, he made a symbol of the National Socialist German Workers' Party. It represents reincarnation, well being, or good fortune.

Thank you for knowing history. People these days seem either like they don't know or want to know it, just like to be told what it is.

Truth is some people these days want to be told what to think. They've stopped thinking for themselves.

Okay every here it is a brand new page and I think that as NS fans and Naruto fans we are all going to love this page I know I did.

Is it wrong that it brought a tear to my eyes?

I think it's amazing that some people are still here. That's the power of NaruSaku.

No, that's the power of this community. The people here are incredible.

Should of just gone with Naruto: Next Generation, that makes it simple to understand

Or how about this Naruto: No Next Generation, since we didn't need one.

All we had to do is end Naruto and have an epilogue and that's it. No one asked or wanted a new generation. And by no one, I mean the fans. Obviously the higher ups wanted to milk the series until the end of time. But the fans regardless of the motive they followed the series, never wanted a next generation.

I suppose it doesn't matter anymore. Kishimoto as a name and a mangaka brand doesn't carry any weight today.

While his peers (authors that made manga with more than 50 million copies sold) continued to produce with reasonably acceptable reception; Kishimoto's latest manga sold less then 10k per volume in their first week and has to be axed at 5th volume. All this despite heavy marketing upfront.

Whether he 'red penned' The Last or not, the fact remains he has lost his loyal readers that used to finance his work (Naruto).

It just shows that you don't F with the fanbase that actually got you were you are, that a name isn't enough to sell and your work actually has to be good.