The Legend of Korra: Avatar Korra

Republic City is everything that Avatar Aang and Fire Lord Zuko fought for when they ended the Hundred Year War. With balance restored to the four nations, benders and non-benders can live together in peace, in this thriving metropolitan area. But even the steampunk paradise of Republic City has its problems, as the next Avatar discovers.

When Avatar Korra arrives in Republic City to master her airbending, she comes face to face with criminal bending gangs as well as members of a vocal anti-bending revolution. Before long, Korra's Avatar skills are put to the test when she encounters a group of Chi-blockers led by the charismatic and mysterious Amon, who threatens the city and all the benders in it. Despite the immense danger, Korra vows to fight the growing anti-bending revolution.

But will she be able to stop Amon before he rises to power and makes his vision of a bending-free world a reality...?

After the conclusion of the War, Aang and Zuko brought people from the four nations together and founded the United Republic, creating Republic City, a large "metropolis powered by steampunk type technology" such as cars and motorcycles. Aang and Katara had three children, the youngest of which is Tenzin, who has been confirmed to be an airbender. Meanwhile, Toph Beifong traveled extensively to teach metalbending. After Aang's death, the next Avatar, Korra, was born in the Southern Water Tribe.

At the present time, seventy years after the end of the War, Korra is a rebellious seventeen year-old girl. As the Avatar, she has already mastered waterbending, earthbending, and firebending. She will learn airbending from Aang and Katara's son Tenzin. Tenzin himself is married; Pema is his wife. Jinora, a "bookworm," and Ikki, a "motor-mouth," are his daughters while Meelo, his youngest child, is his son.

The primary and only confirmed setting is Republic City. Anti-benders called "Equalists", who oppose the arts of bending, utilize techniques such as chi blocking to further their goals of revolution, led by Amon. Korra must fight rampant crime and the anti-bender revolt, assisted by two brothers, Mako, a firebender, and Bolin, an earthbender. She is also joined by her animal guide, Naga, and the metalbending police force of Republic City, who are led by Toph's daughter. Book One AIR - Chapter One: "Welcome to Republic City" [episode link] (Right Click & Save As...)
Korra leaves the safety of her home and travels to bustling Republic City to begin her airbending training. Once there, she is shocked to find a big city full of dangers, including criminal bending gangs and a vocal anti-bending revolution

Book One AIR - Chapter Two: "A Leaf in the Wind" [episode link: see episode 1]
Korra is living with her airbending teacher Tenzin on Air Temple Island. Frustrated with her inability to master airbending, she turns her attentions to Republic Citys famous Pro-bending Arena. There she befriends two brothers, Mako (David Faustino) and Bolin (P.J. Byrne), who compete in professional bending matches. Korra is immediately drawn to Pro-bendings dynamic fighting style.

Book One AIR - Chapter Three: "The Revelation" [episode link]
In order to collect enough money to pay off their pro-bending fees, Bolin joins the Triple Threat Triads for an upcoming turf war and disappears...

Book One AIR - Chapter Four: "The Voice in the Night" [episode link]
Korra is recruited to join Councilman Tarrlok's task force which tries to rid the city of Equalists.

Book One AIR - Chapter Five: "The Spirit of Competition" [episode link]
The pro-bending championships are about to start. However, Korra and her teammates struggle to work together after romantic rivalries shake their foundation and threaten to end their championship bid.

Book One AIR - Chapter Six: "And the Winner Is..." [episode link]
Korra and the Fire Ferrets prepare for the pro-bending championship as a threat looms over the arena.

Book One AIR - Chapter Seven: "The Aftermath" [episode link]
Korra begins to suspect that an ally is working for the Equalists. Mako and Bolin get a new home in the Sato estate due to the damage of the Pro Bending Arena.

Book One AIR - Chapter Nine: "Out of the Past" [episode link]
Korra tries to analyze the mysterious visions she's been having. Meanwhile, Tenzin and Lin look for Equalist hostages.

Book One AIR - Chapter Ten: "Turning the Tides" [episode link]
Korra works to recover from her time spent imprisoned by Tarrlok, but when she is interrupted by Republic City coming under attack from Equalists, she is forced to take action against the evil group and their mysterious leader Amon.

Book One AIR - Chapter Eleven: "Skeletons in the Closet" [episode link]
Korra goes undercover as the war intensifies; Korra faces the Equalists mysterious leader as the war comes to a head.

Book One AIR - Chapter Twelve - Finale: "Endgame" [episode link: see EP11]
In the first-season finale, Korra goes undercover and learns a secret while her teammates go after the enemies stronghold. Then Korra confronts the enigmatic ruler of the Equalists. ! Looking forward to it!

OH, WOW! I'M SO EXCITED FOR IT! It looks super kaduper promising!

... I'm just wondering. Why is there no mention of Sokka at all? D:

Finally a release date and april 14 th? less than a month waiting

Strange that the promise part II & III are released after the premiere of the sequel.
Will be very awkward to first follow a story where all the old characters died only to read the promise and they're all alive again.

In support of the Sakura we once knew: 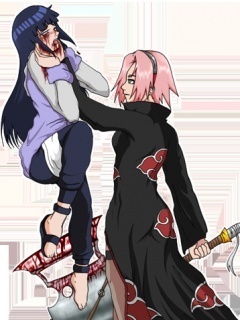 Wow, so soon. I heard it wasn't coming out to later this year. Heck ya, can't wait.

Comes out on my birthday what a present.

hear this is only a mini series. Should I consider it?

Does this even need to be consider? have you watched Avatar the last airbender? then you should watch this.

Haven't seen you around Nice.Cant wait to see what happens.

Wow, krisk. Only you could make such an epic presentation for such an eagerly-awaited series like this XD

I looove the Snow-Dog looking creature Korra is riding, and I reaaallly hope this new series is as epicawesomewin as Avatar: The Last Airbender was =D

"The Last Air Bender" has nothing to do with my opinions on this. I Learned from experience to never judge a series based on it's prequels or previous installments for anything. All too many times when I try something due to the hype of my fandom for the previous series or whatever came before it, 7-8/10 it disappoints me. That said I'll watch a little bit BEFORE I judge if it's worth watching

Hell yeah it's about time they release the series I was getting so inpatient with the waiting.

Lone Wolf of the Grave

I am Johnlocked. Formerly known as "Kushina".

Hogawd, so excited for this. I'mmuna be watching that meter like a hawk B(

Haven't seen you around

QUOTE (Sakura Blossoms @ Mar 17 2012, 12:20 PM) <{POST_SNAPBACK}>
Wow, krisk. Only you could make such an epic presentation for such an eagerly-awaited series like this XD

I looove the Snow-Dog looking creature Korra is riding, and I reaaallly hope this new series is as epicawesomewin as Avatar: The Last Airbender was =D
HAA ty ty lots shaunamama. it'd look better without the site's auto-resizing feature tho........

QUOTE (Phantom_999 @ Mar 17 2012, 02:02 PM) <{POST_SNAPBACK}>
"The Last Air Bender" has nothing to do with my opinions on this. I Learned from experience to never judge a series based on it's prequels or previous installments for anything. All too many times when I try something due to the hype of my fandom for the previous series or whatever came before it, 7-8/10 it disappoints me. That said I'll watch a little bit BEFORE I judge if it's worth watching
ATLA is a great show. the the target audience they chose for it was without fault the most accurate choice; the last airbender is a kid's show. i'm assuming that's why you gave it a mediocre score. if so, it's undeserving tbh. if not, then my claim has no base and you'd have to explain it to me.

regardless, THIS show is something you should be excited for. if you don't look at Korra and go RELEASE DATE WHERE, idk what to tell you. in fact, this thread's opening post should be justification enough

but it's your choice. nobody will die if you don't watch it. 
TO WATCH OR NOT TO WATCH

THE LEGEND OF KORRA WILL REACH GLOBAL SATURATION.

http://brotasticforce.wordpress.com/
Game With Us!
Back to Arts & Entertainment District