Okay guys if you don't want to discuss any new Sakura content and wants this forum as dead as before only with claims and complaints with a ship who sunked 8 years ago.
Bye.

Can only speak for myself, but had no issue with your posting. Any vitriol I would have I would direct at the manga publisher for reminding me that Naruto exists while I'm trying to live my best life.

The smallest gesture from him completely hit her in the feels and immobilizes her. If they actually held hands, instead of just touching hands once before he walks away, she would probably spontaneously combust.

It made sense for Itachi to look weary, though.

This portrayal of Sakura does seem much improved from Gaiden, but that's not really saying much...

Seeing Sasuke save her from a rapey situation, I honestly just feel nothing. Not even the slightest bit of cringe. Just nothing now.

I don't really like how she looks though. I guess it's the prominent eye lines. She looks old. And tired. And worn out. Much like Naruto itself is.

The crazy Hinatards are apparently frowned upon in the Naruto/Burrito community. At least from what I last saw on the Naruto subreddit a couple of years ago.
They downvoted all the Hinatards and dissed her + them.

Like Dragon Ball, Chi Chi is hated because of kittening with Gohan getting to be a fighter. While Bulma is liked because of her useful inventions. Stuff like that.

So Hinata has no pull to do anything, she never did and never will.

Wait, so even if every well-known writer on the planet all got together, every well-known filmmaker and even better writer in Japan all said how bad NH and SS are and how bad Kishi is, they would still say NH was planned?

All you have to do is read the manga. With a critical eye. And it's obvious what was intended.

If someone isn't convinced by the manga itself there is nothing that will convince them. Because to hold the position that NS was never intended is just not possible without a complete lack of objectivity.

#984172 Bail o' Lies Nickname of Boruto's character for the summaries.

Overall, I give these nicknames because I don't remember the characters names most of the time and can't be bother to while it easier to remember nicknames that are descriptive in some way. Also since most people commenting say they refuse to read the manga i figured most of you wouldn't care.

For me it's more that I don't want to. But yeah I mean, if you show me a picture of almost any non filler character from Naruto I could tell you their name. And I haven't seen Shippuden hardly at all, etc... I just like about 2/3 of the manga.

But there was a point when I read Boruto and didn't even hate it and I couldn't tell you who those guys are. Sleazy inventor and Rich kid may as well not even have names.

concept wise, sure. You can argue for it. Admittedly their Dyjnamic is typical. Story wise, It's been hit with nothing but death flag after death flag. I'm pretty sure that in Shojo manga/anime, if the cool bad boy tried to kill the heroine/MC of the story, said "bad boy" a no-go. And even casting that aside, the story goes practically that Sakura wore Sasuke down and he guilt tripped himself into being with her, whereas an actual love interest would have redeemed himself LONG before getting together with the heroine at BARE MINIMUM.

Any pairing with Sasuke is either crack or he tried to kill them.

nH fanfic are some of the worse stories/writing I have ever read as well as the dullest. If it doesn't spend most of the story going on and on about either how much of a victim Naruto is and how he is entitled to anything he wants because he a victim, or bashing Sakura as the worst friend-zoning kitten to ever exist who needs to be torture for not putting out and hitting Naruto. The romance of nH is just so dull. Naruto is alone. He makes a friend. The friend points out Hinata likes him. They get together. Nothing happens but we are told it great/perfect because has someone who loves him even though they don't do anything together or if they do it some of the dullest stuff you can think of.

Most here will probably not agree with this, but SasuSaku is far better than NH is. I still DON'T like it, but it is like a corollary to NaruSaku and NaruSasu as a fight for acknowledgement from someone important.

You could make SS decent by changing a few (ok, a bunch) of things. NH is basically unsalvageable. Naruto gives his acknowledgement to Hinata for free b/c he values his precious people. Then Hinata gets to be with him for free after doing nothing b/c she always liked him. And we're done. That's so effortless and boring.

Its the reverse for nH it is a miracle where half the plot it not it true focus is bashing Sakura. Often the climax is finding ways to kill her in the most brutal fashion possible.

There are so many. I think the most pathetic example I've ever seen is one which was a Naruto x Gaara (or maybe it was fem Gaara) angst story where Naruto goes to Suna and Sakura and Sasuke come after him, getting captured in sand by Gaara for being mean to Naruto ofc... And Gaara is about to kill Sasuke but Naruto stops Gaara saying he doesn't want him/her to become a murderer again. So Sasuke is spared but Gaara still wants to kill Sakura... To which Naruto agrees because the world will be a better place once she is dead. So Sakura is killed with no consequences whatsoever.

It's like holy kitten. This person completely sabotaged the climax of their story and made it into a farce JUST to kill Sakura, who was mostly irrelevant to the plot. If I were to read that without knowing anything about Naruto I would think there was something INCREDIBLE going on with her character and want to find out more about her.

There are probably worse examples involving Hinata but I don't care to read anything with her. She is so boring even if she's not with Naruto but especially with.

Should I be surprised that video has more dislikes?

Hinata and NH will always be obnoxiously popular. If you want to roll your eyes, go look for fanworks where Naruto is with Hinata and bashing Sakura is a stated goal that they even acknowledge they're doing on purpose. There are thousands.

But if you wanna read NS where bashing Hinata is an explicit goal? Good luck even finding one.

3: As in my head Canon and the Canon of the In your storylines Hinata must let go and move on, theres a dojin of this very subject i cant remember its name though but in the end one panel stood out it was Hinata walking away from naruto and Sakura while her yoingerself runs towards them. this image always stuck with me and i adopted it as the image of my own story

There's the NH (as in NejiHina... which was probably the intended ship) doujinshi called Terrace where that happens: 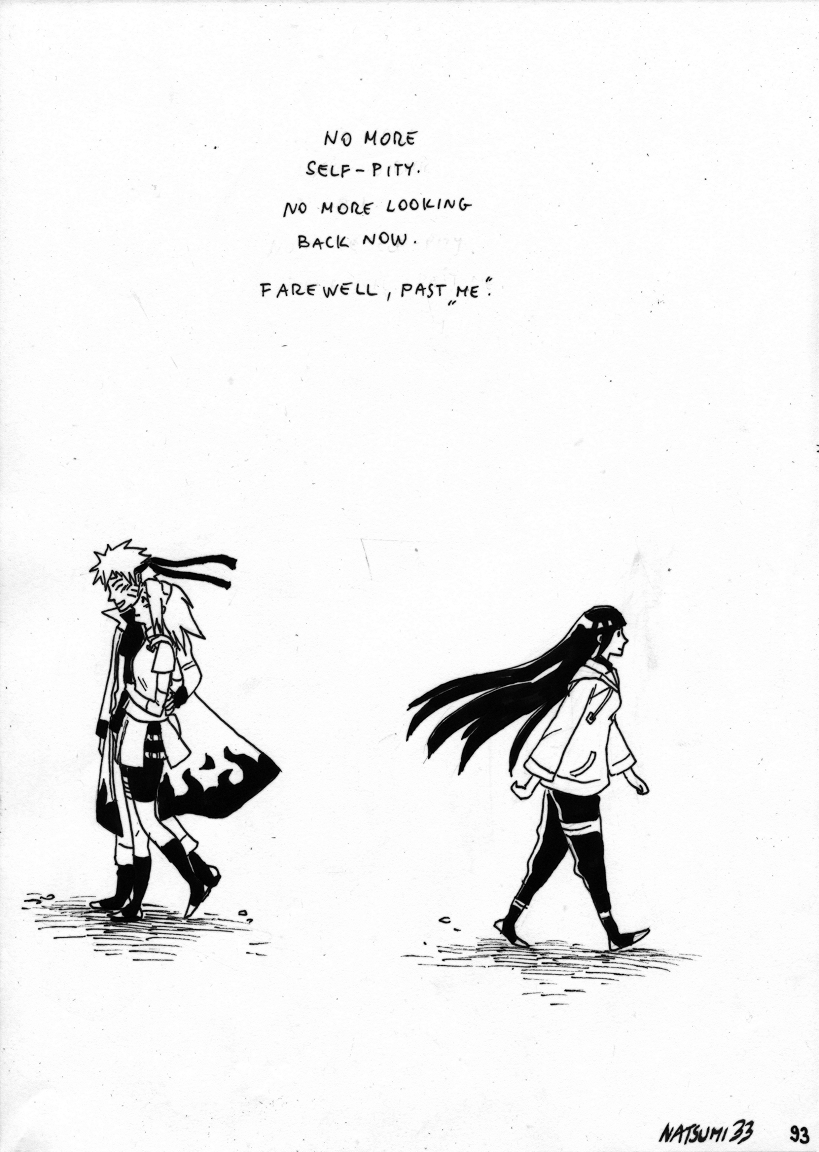 But naw it was better and more beautiful for Hinata to win while Sakura is alone forever ofc. She did hit Naruto those 3 times.

I don't know who the hell gave her that trope because she isn't any Lady of War. She doesn't even qualify, plus the rock tripping was not the only reason. That trope should be assigned to Tsunade as she fit the bill.

Her general lack of composure and competence is the problem. On the surface, she could technically be one if she acted more dignified. And was a good fighter.

I think an even better example than Tsunade would be Konan.

In summary studio pierrot is a dog chasing cars and NaruHina is the car. They never had any idea what they would with it upon catching it. Which is why Boruto (nor even the original anime) spends ZERO time actually showcasing the dynamics of Naruto and Hinata's relationship. That's because there are NONE. It's so bad that they've had to outright STEAL personality quirks from Sakura (i.e. Hinata is a "scary" mom, LMAO!!!!).

Hinata can't be dynamic. She's the perfect background character. She shows up, does something typical, you react to it (usually by laughing, let's be honest here), then leaves. She doesn't have depth and can't survive being the focus for long. Just brief periods and it is easy to appreciate her in that context because again she's narrow, you know what to expect from her, and it's like "lol, of course".

Trying to take her very seriously or make her a protagonist doesn't work because no part of her is like that. She was usually played as a joke. Are there little girls who admire Hinata and want to be like her?

From a neutral fan perspective, making Sakura look like s** doesn't help with this because Sakura already looked like s***. But Sakura was never played as a JOKE.

I don't think it works well to pair the hero with a joke character. They've stopped playing Hinata as the joke but it doesn't help because she had very little to offer beyond this.

I made a thread here about this very subject a while back and even analyzed things panel by panel, but when you examine Sai's actions throughout this arc, it's as if he's three different people. His personality and justifications for talking to Sakura and Naruto contradict each other multiple times. It's as if someone decided to completely rewrite his characteristics at the last minute after seeing a bunch of fanboy/fangirl backlash towards his initial comments/observations about Naruto loving Sakura and her causing Naruto pain. Immediately in the chapter after he says this, he makes a dumb@ss non-sequitur comment about how everybody relies too much on Naruto as opposed to just Sakura and Shizune joins him by making a moronic unnecessary remark about how Naruto isn't just saving Sasuke because of his promise to Sakura. If memory serves me, I wanna say this took place in chapter 458 or 459. Either way, things go downhill from there.

To be fair, Sai was shown to slowly become more competent at reading people's actions even after his debut (based on a book he was reading). He made some surprisingly accurate observations with respect to how Sakura's fierce behavior towards Naruto was in actuality a testament to how much she cared about him. In a flashback in chapter 457, he's also shown rightfully coming to the conclusion that Naruto loves Sakura in light of how much he smiles towards her all the time. He didn't become a complete retard until the NH/SS got butthurt over his initial comments towards Sakura about Naruto's POAL. Then that entire arc went funhouse mirror all of the sudden.

Sakura just had to be caltropped by herself or others every time she was starting to move away from the Sasuke thing. Because Kishi just didn't care for some reason.

Like, it's one thing if Sakura is not worth the effort. Maybe she wasn't. But you already gave the effort! You did the hard part. The rest would have been easy. And you just wasted it.