Naruto: The Demon Within by Bryon

Hey, guys, it's Bryon here. After talking in Derock's Writing Discussion topic about his own story and what he's doing, how I have been working on revamping my fanfic from years ago, Naruto: The Demon Within,  plus Chatte discussing her own fanfiction too... well, it's gotten me to wanna do a discussion thread of my own for The Demon Within.

To begin with, Naruto: The Demon Within was begun back in 2004 by me and my friend Kurt when we had been reading Naruto during the Sasuke Retrieval Mission, around the time Naruto and Sasuke were getting ready to throw down in the Final Valley, beginning around the time during Sasuke's flashback to his motivations of wanting to kill Itachi, and we just kinda rolled with it from there with our ideas based on what we knew at the time, even improvising some stuff. We mostly did this as a fun kind of talking RP that we would do since high school.

But as years passed, we kinda ignored it, until I wanted to go back and do some revamping after having not written it for a long time, as well as the ending influencing me to do it at the same time too. We kept a lot of the same ideas we had going on back in '04, though we also began to work on some new stuff too to evolve things.

The basic premise of TDW is simple; it's a similar approach to the main canon, but it diverges in a lot of things, such as past events, and even the present. The biggest example is the Final Valley battle with Naruto and Sasuke. Rather than it being where Naruto loses and Sasuke gets away to go to Orochimaru so he can get power to surpass Itachi and Naruto due to his hate and jealousy for them, and his own inability to see his own weakness, it ends in a draw with Naruto and Sasuke both taking each other out, and returning to the village when Kakashi finds them after the fight, which also does a number on the Final Valley too.

So after arriving back in the village, more chaos ensues, and leads to events where Naruto begins his own training since he doesn't go with Jiraiya out of the village, Sasuke is recruited into the Foundation by Danzo since Danzo can sympathize with his jealousy but also wanting to hope he will die in a mission so Itachi can't use him as a bargaining chip because of Danzo's involvement with wanting the Uchiha clan slain, and Sakura training under Tsunade.

The main part of the story takes place 3 years after these events, where the Leaf Twelve (now known as Super Rookies or the Dirty Dozen) are prominent and raised to the rank of Chunin (though Shikamaru is a Special Jonin and Neji is a full-on Jonin), and it involves various battles with all kinds of foes; Orochimaru and the Sound Village, the Akatsuki, actual demons and other beings outside of the perception of humans as well as Madara Uchiha.

But the story also involves aspects such as Naruto's role as a Jinchuriki, his bonding with Kurama, etc. and the bonds he makes to become the kind of person he wants to be, as he aims to become a Hokage of his own way, without needing others to influence him.

The biggest thing in this to set it apart from main canon is how some of the characters are. In the case of the big three of Team Kakashi, it's really shown. Even if Naruto has a lot of some of his old mannerisms with elements of how he could be in Naruto: Shippuden, he's actually grown pretty significantly in TDW's canon to where he's a pretty good fighter and shows he can be one heck of a leader if he's made it to being a Chunin. He also is motivated to become Hokage for the purpose of protecting what's precious to him, having also had to do some of his own hard work in addition to asking for some help from others like Iruka and Guy. He'd also have a different English voice in my head, as if to show how he differs from canon.

With Sasuke, initially, he's in a much darker place when the story begins, due to how his anger, hatred, and jealousy over the three years from the prologue and the first few chapters to where the actual story takes place, thanks also to the things he's done in the Foundation and Danzo making him more vicious that he isn't about killing anyone for his job or those who stand in his way for that matter. He also is motivated most of all initially to kill Naruto as payback for what he did, and due to his jealousy at Naruto's growth three years ago, though his ego makes him assume he's still the stronger.

And with Sakura, while she has grown a lot too, what her biggest changes are is that after Sasuke tried to kill her in the prologue, she actually is shaken around him in the first few chapters until she lets out her annoyance at him, but Naruto helps her feel more at ease with that, and that her feelings now are way different than the supposed love she had for him beforehand, and that she continues to work hard with Tsunade so that she can be able to help Naruto avoid nearly dying, and to also stand up to Sasuke and help him as a friend.

And for something fun to close off the start of this topic, I present some art someone did of my redesign of Naruto on Tumblr a while back. I gotta say, this captures what I was shooting for! 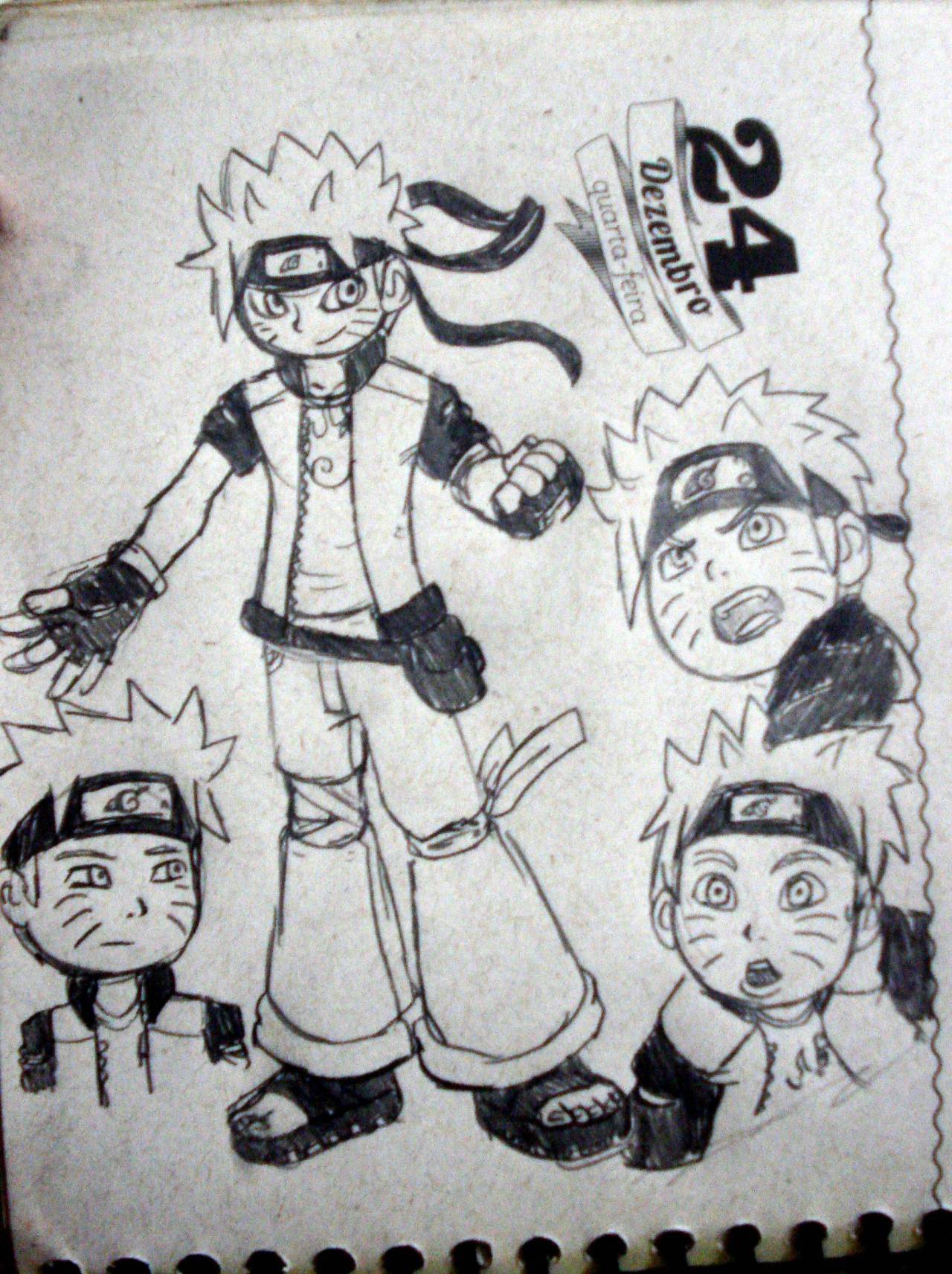 Naruto: The Demon Within Character Designs

Hey, guys, Bryon here! Just wanting to show off some stuff for my Naruto fanfic, some character designs I did a few years back, and how I know I'd wanna go back to redo these, since I feel like I am getting better at drawing, even if a lot of what I do is just with pens and markers. But it's just my prerogative! XD 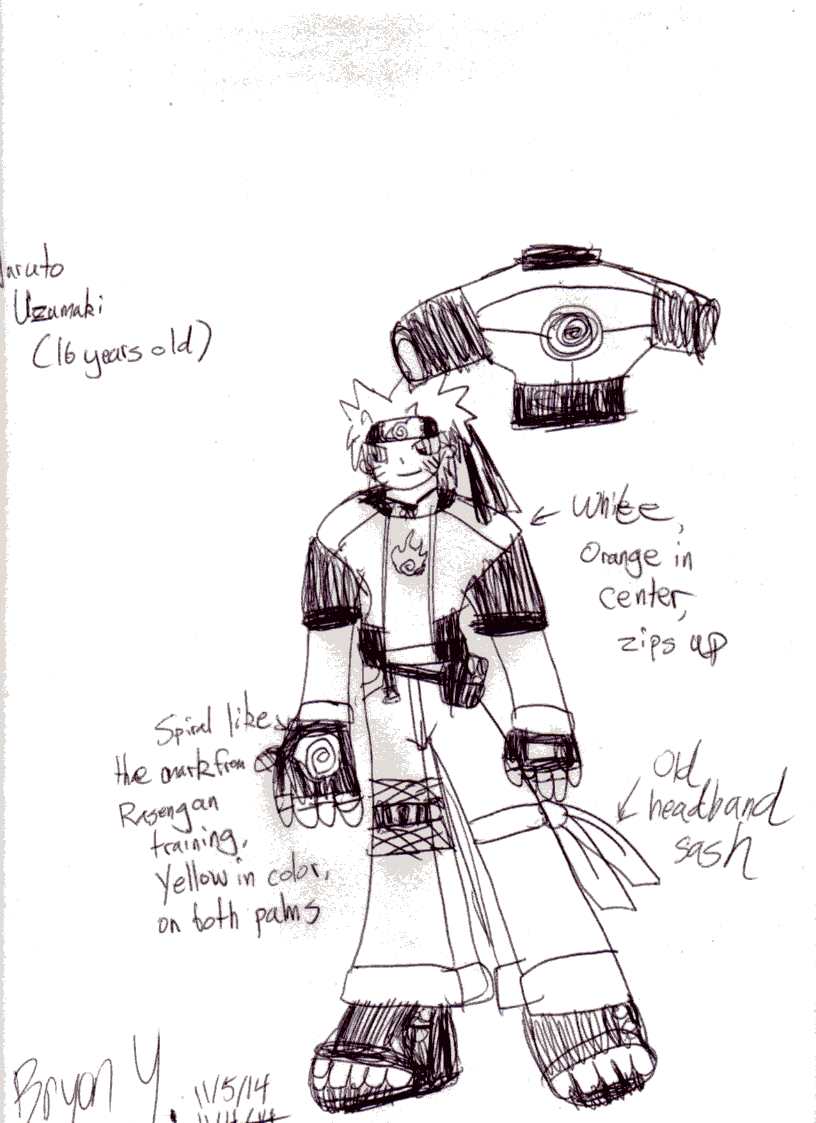 Sorry if the quality of the scan isn't very good, but first up, we got Naruto Uzumaki himself. I will say, I had a lot of fun designing Naruto to feel the same, but to also stick out as something new in terms of how he's changed in TDW's story compared to the canon of the series. I took ideas from all sorts of things to design Naruto as I did, but I feel the finished product is something to be proud of! Especially for something I drew 5 years ago...