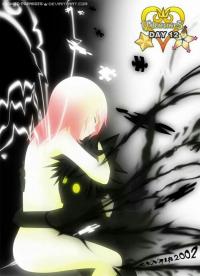 In spite of Kishimoto's disastrous mishandling of the manga and lack of writer's integrity,  I remain NaruSaku trash. SE announced that Cloud versions of all of the Kingdom Hearts games will be available for the Switch.  Additionally, there is a live event that will be happening on April 10th.  It'll likely pertain to the new games that will constitute Phase 2 of the series.

i got some bad news yesterday my dad passed away

I'm sorry to hear that, man.  Feel free to vent if you need to. We're here for you.

They are just too stubborn to do it.

They at least won't acknowledge their mistake openly.  The fact that they have tried to bait us back into the fandom with NaruSaku-esque content, whether it pertained to Naruto/Sakura or Boruto/Sarada (which is a discount NaruSaku) is an indication that they know that Hinata is not as popular or profitable as they wished to believe.

Which again, has nothing to do with sexism. It is literally Sakura versus everyone else. If you apply that logic to Hinata, she WILL be defended by arguments such as, “she emotionally supports Naruto with her love and that’s what counts". She realigned a dislocated Shoulder for Naruto, and that is apparently the greatest display of medical expertise ever seen and she is a hidden prodigy medic. If Sakura does the same though, it is treated as " useless thot was just doing her job, don’t make a big deal put of it." Again, not exaggerating here.

Yeah, never mind the fact that she was willing to kill her own childhood crush and risk his consequential hatred because she wanted to protect him at all costs(instead of selfishly risking her own life, knowing it would benefit no one, just to have some self-satisifaction in her final moments like a certain heiress). Or how she tried to embrace him and calm him down when he went into a berserk four-tailed mode. Or feeding him when he couldn't use his hands. Or y'know, saving his life by massaging his heart and giving him CPR.